Fall Girl shares a similar control scheme to The Binding of Isaac, but the similarities end there. While Isaac drew inspiration from The Legend of Zelda, Fall Girl takes inspiration from later, more narratively-driven games.

Stealing batteries from a neighbor's house.

As Fall Girl begins, you learn that the AI you developed has escaped and is threatening to cause havoc. The missions that ensue are always the same and linear with procedural details, so the neighbor's house is generated but you're always there to steal batteries. There's a surprising amount of physical theft in a game where you're supposed to be playing a hacker.

The gameplay is semi-realtime and is semi-successful. Movement and combat operate on different time scales, with movement being possible on a slower clock than shooting. The main drop in the game, chips, further accentuate this time discrepancy. This has the consequence of making movement feel unresponsive, a major issue for an action game. 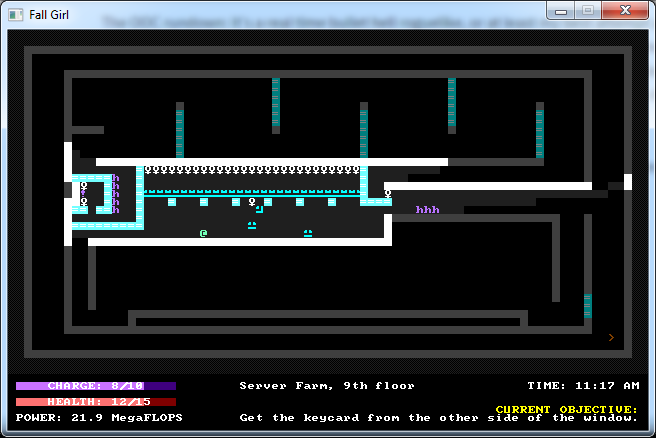 Off to steal a keycard.

Fall Girl shows its narrative emphasis with its full-screen and in-game cutscenes. The writing is serviceable, helps establish a sense of place, and frames the game missions; however, it does commit the sin of making them unskippable.

I'm not sure if Fall Girl's movement system could be made more responsive or not with its mechanics, but overall it was a charming experience that didn't overstay its welcome.