Let me stress again that documentation is essential when developing new interfaces. Ponzu isn't much of a roguelike, but it is an interesting crafting/simulation game that drives players away with its undocumented, obtuse interface.

Ponzu begins by giving the player a mission to sell 10 bags of soybeans. Clicking on the map removes the message. 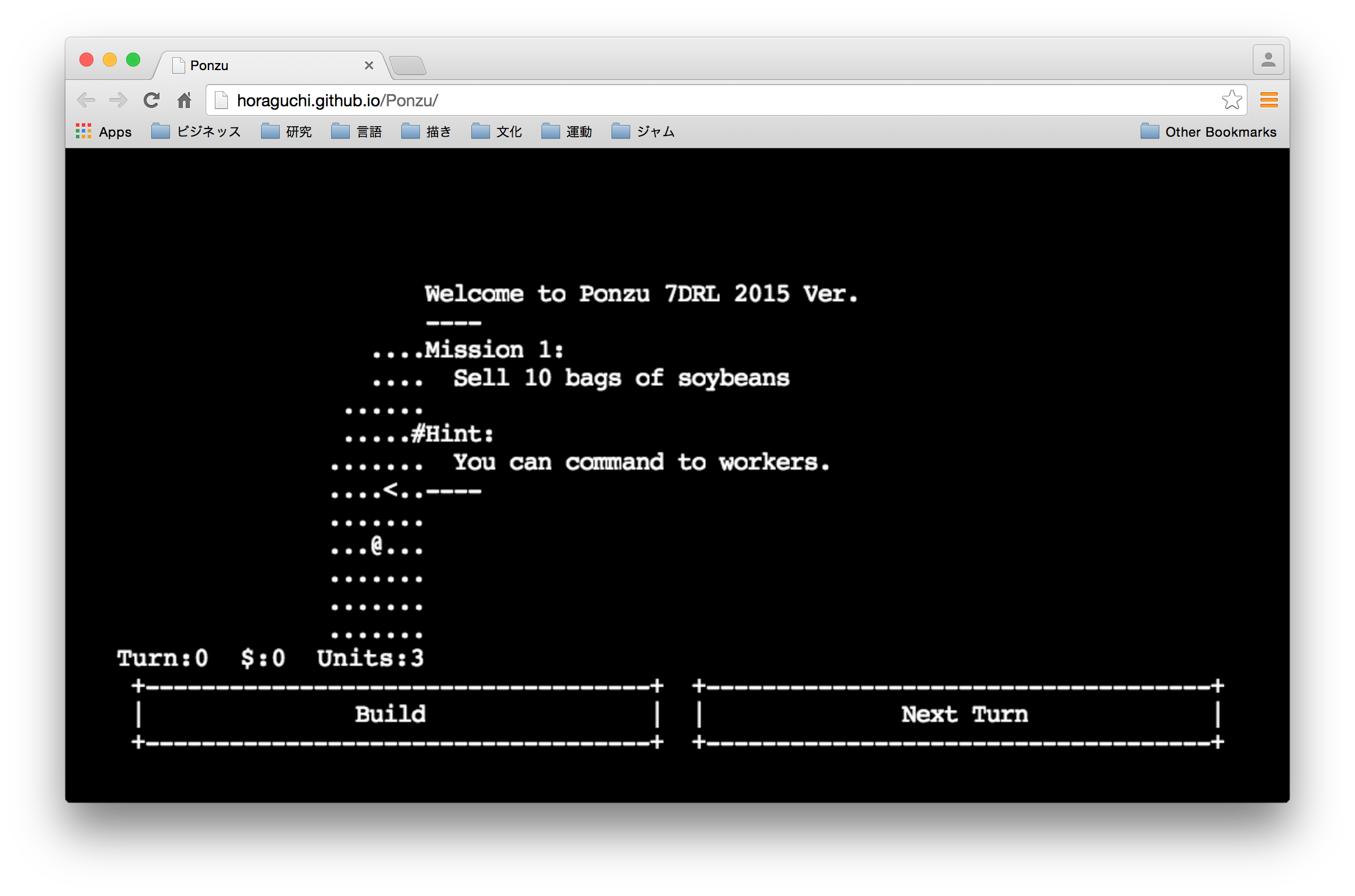 Starting out in Ponzu.

Clicking a non-dot on the map produces a submenu based on the object type: 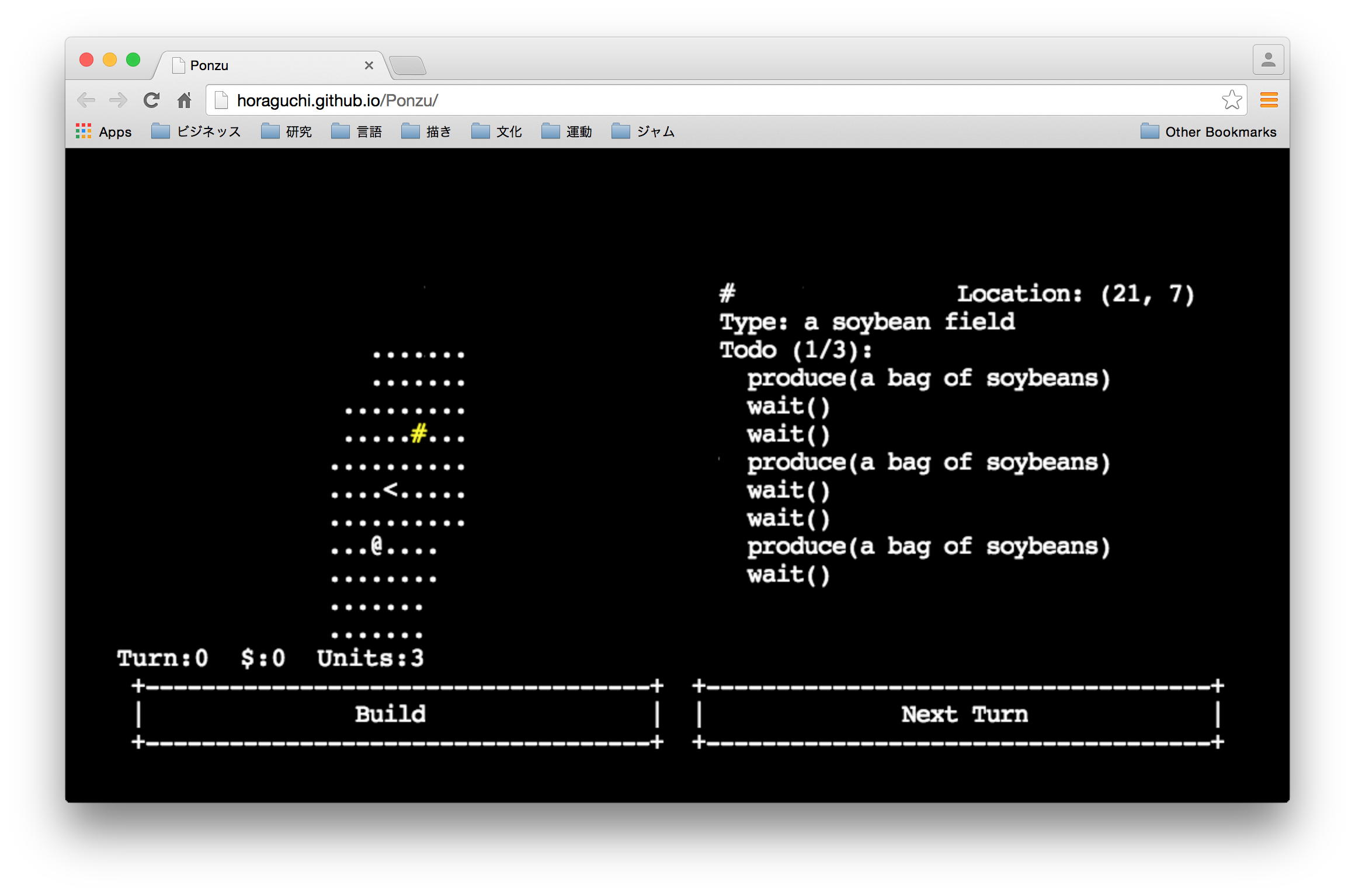 Clicking on a soybean field (#).

What I'll call automatic actors consist of a location on the map, a type identifier, and a sequence of instructions that they carry out, one instruction per turn. Initially, the map consists of two automatic actors, a soybean field (#) and a base (<). Soybean fields produce a bag of soybeans every three turns. The base doesn't start with any actions. Clicking on the instructions will display the actor's inventory. 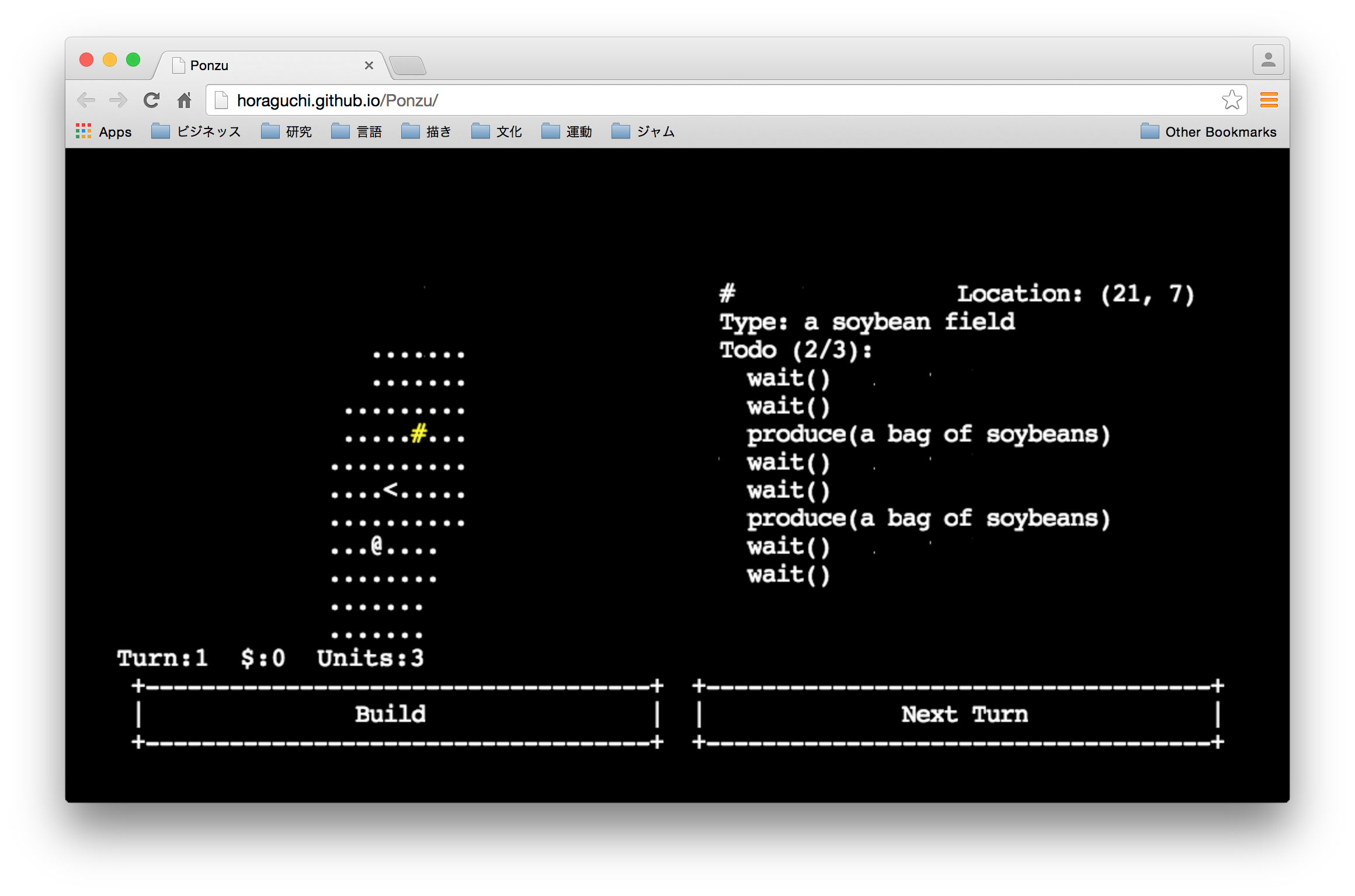 A soybean field after one turn.

A soybean field after two turns. 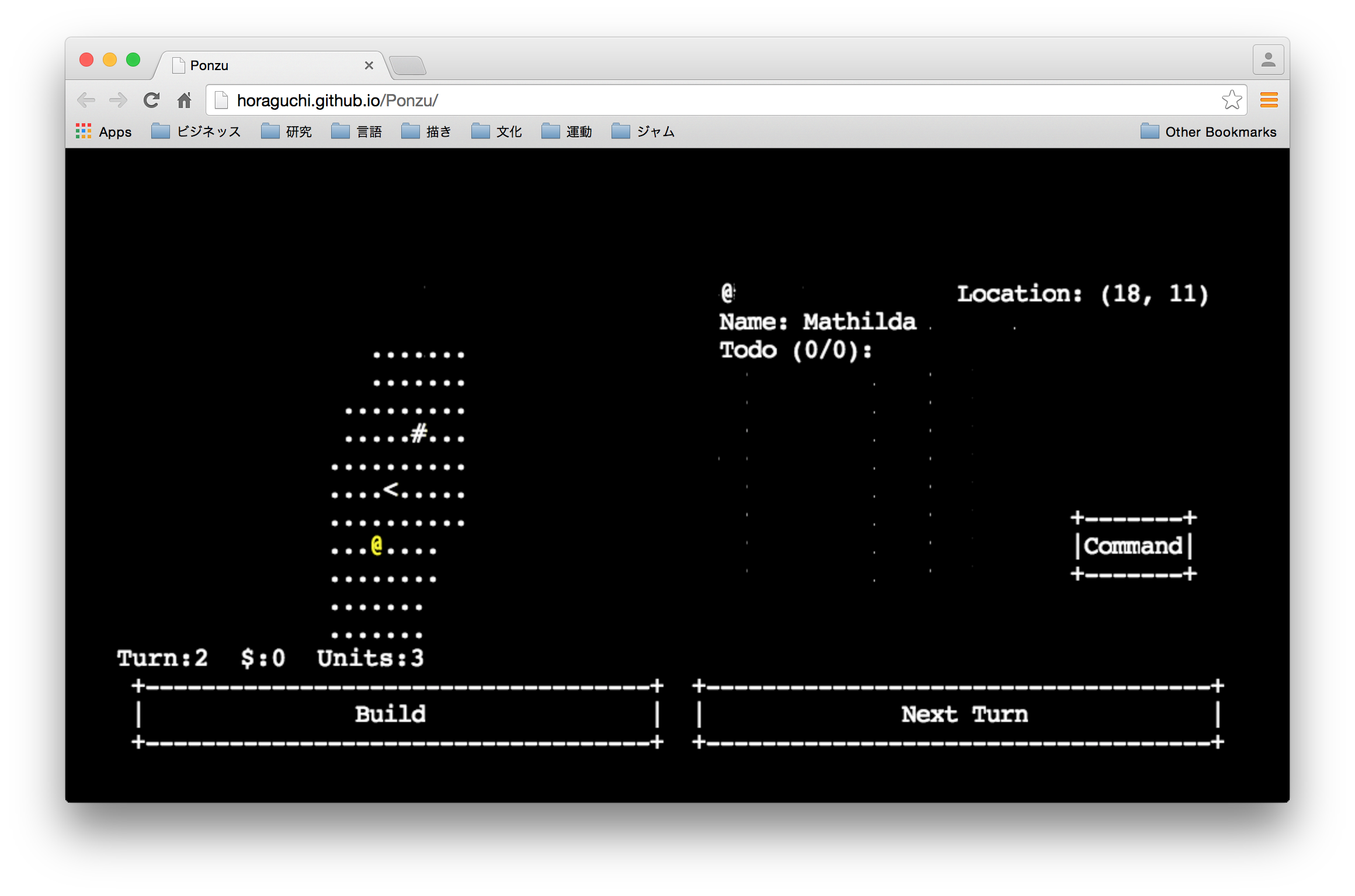 Clicking on our worker, Mathilda (@).

Clicking the command button gives us three new actions: save, delete, and cancel. On the left, note the (0/4) statement. This indicates how many commands we've issued (0) and the maximum number of commands the command actor can retain (4). 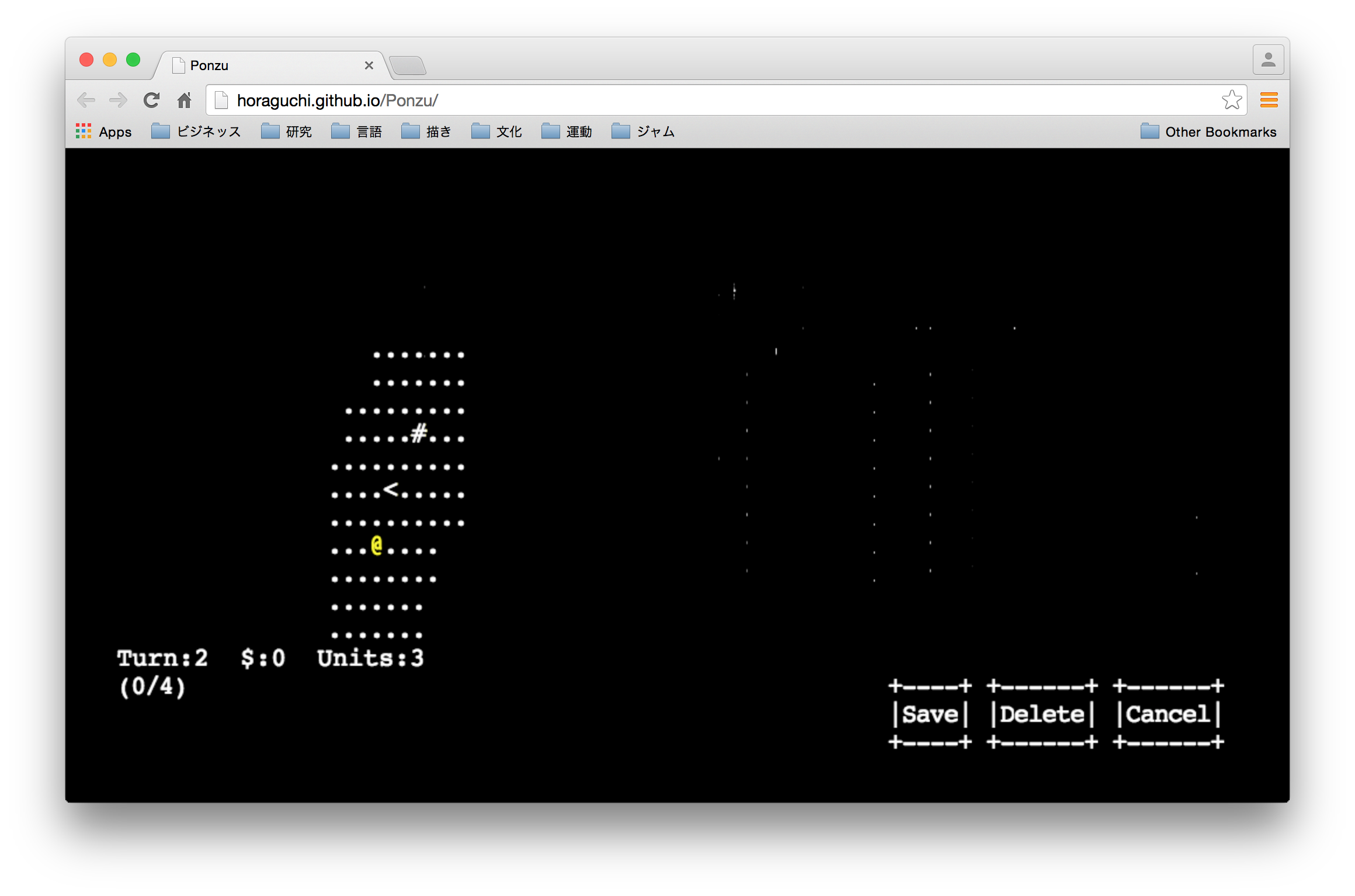 Before issuing Mathilda any instructions.

Clicking an automatic actor in this mode initially adds a command to move (mv) to the location (21, 7 as seen in the soybean field information page, above). Our active command actor is displayed in yellow with the target automatic actor in red. 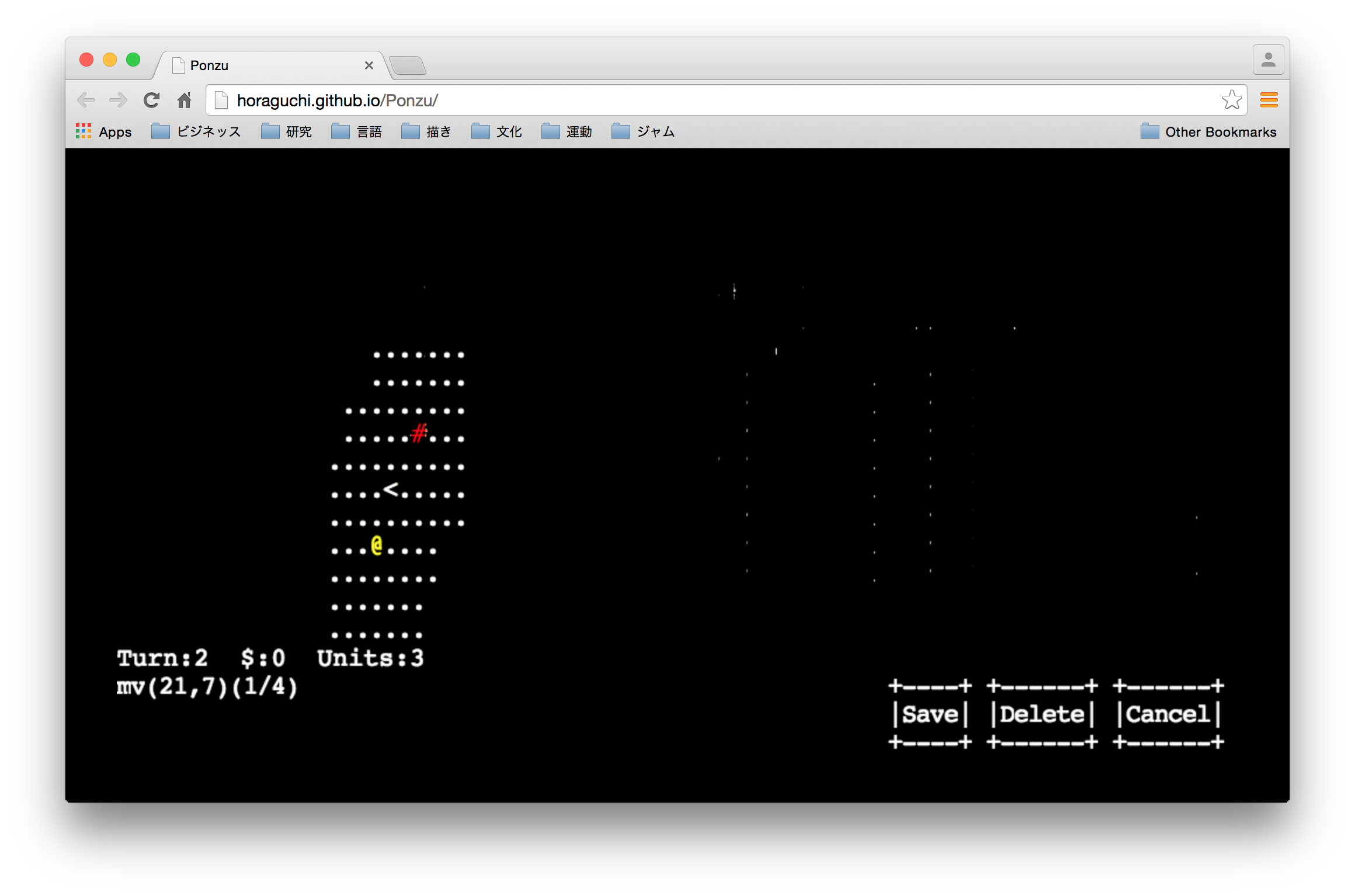 Clicking the automatic actor again then cycles through the available commands for the command actor after arriving. The commands only display a two-letter code while commanding a command actor; when they are executed later, the message buffer displays the entire name. This is difficult for new players, but I didn't have a problem figuring out what they were supposed to be after becoming familiar with the system. 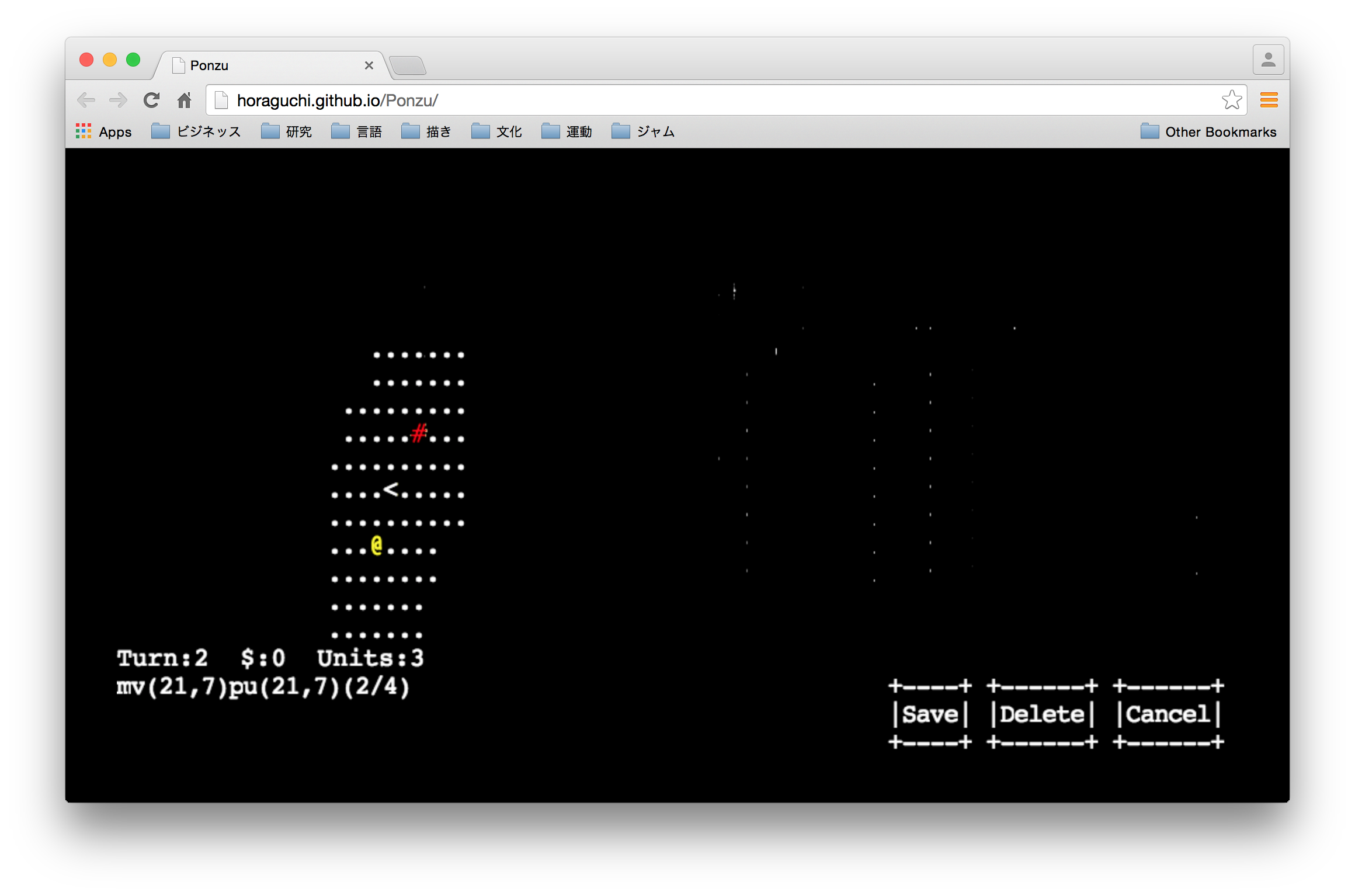 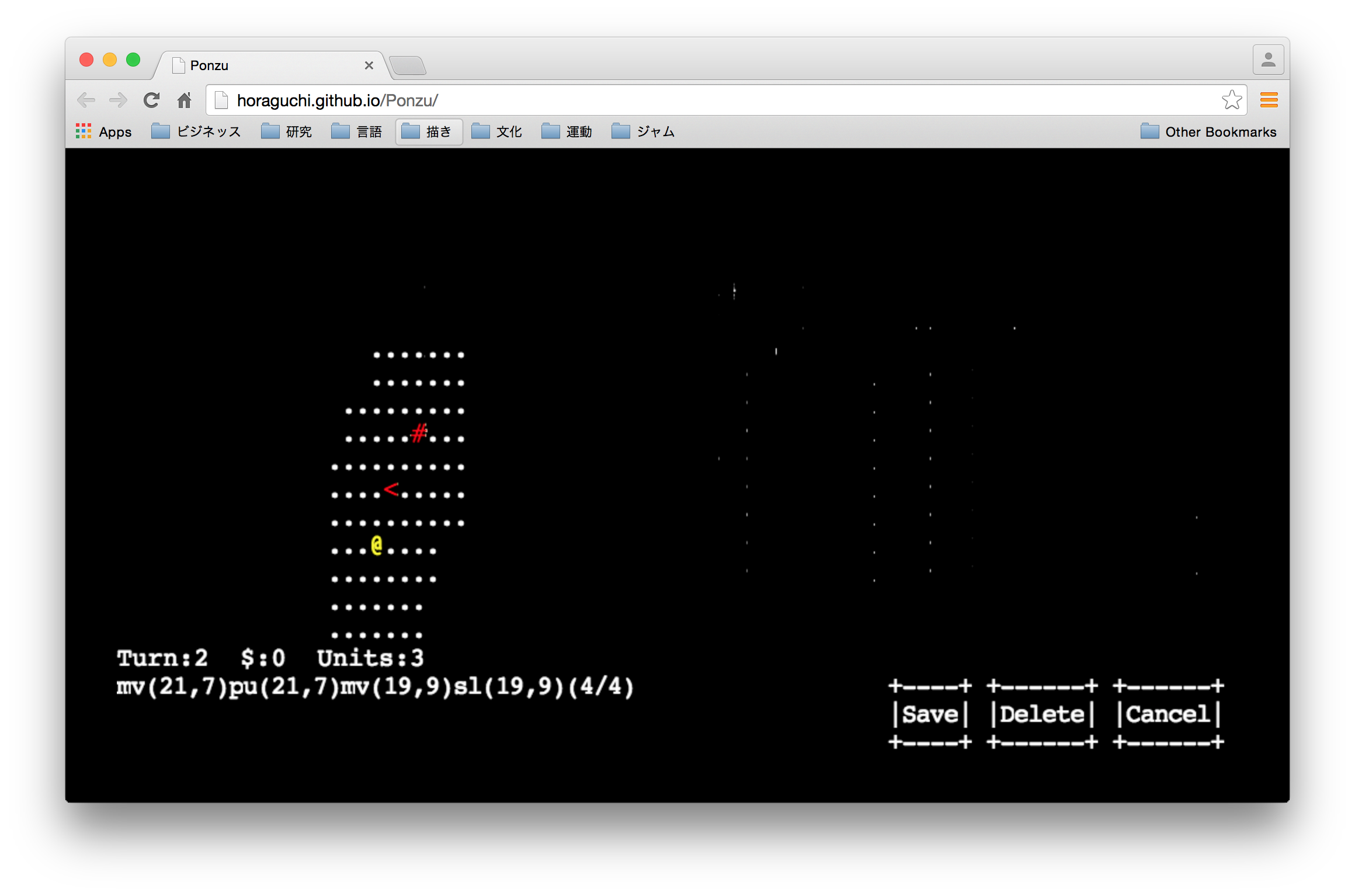 Next, Mathilda needs to move to the base and sl (sell) whatever she's holding.

The delete action clears the command actor's list of commands instead of just the most recent one. When you're finished issuing commands, click the save button to return to the main simulation screen. 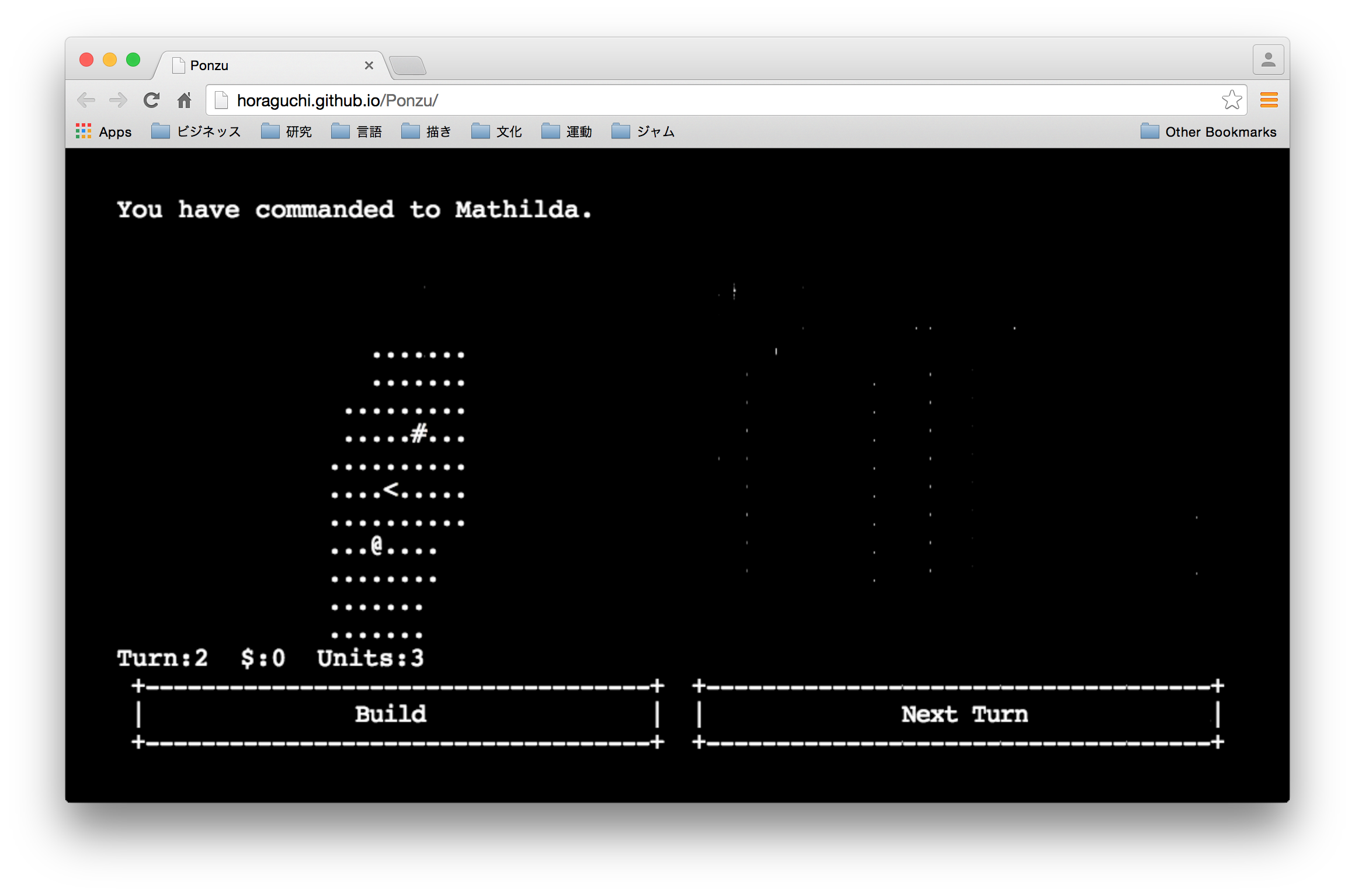 Mathilda is ready to pick up and sell soybeans.

Clicking next will have all actors execute their next instruction. Unlike automatic actors, command actor commands such as move may take multiple turns. 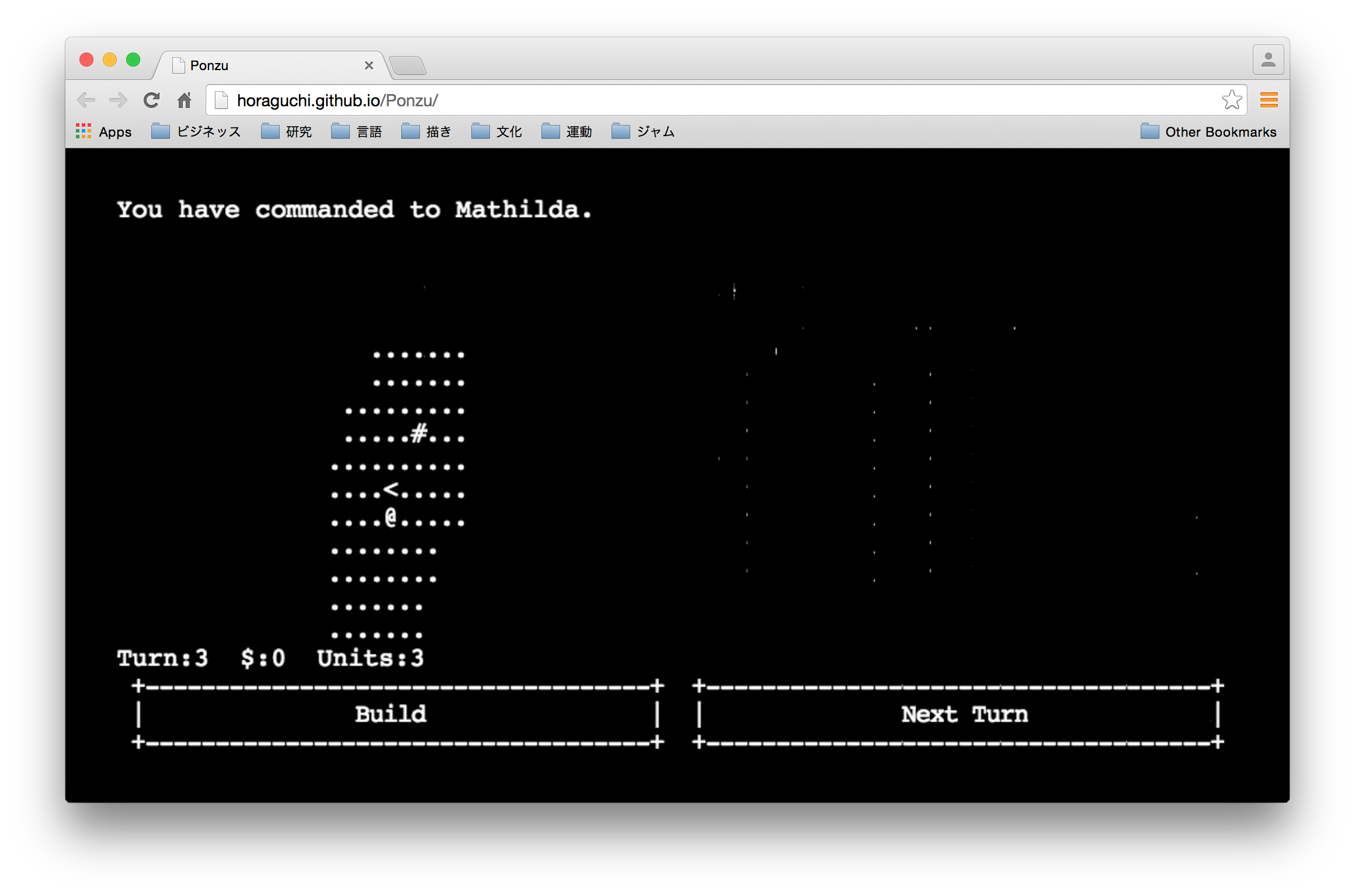 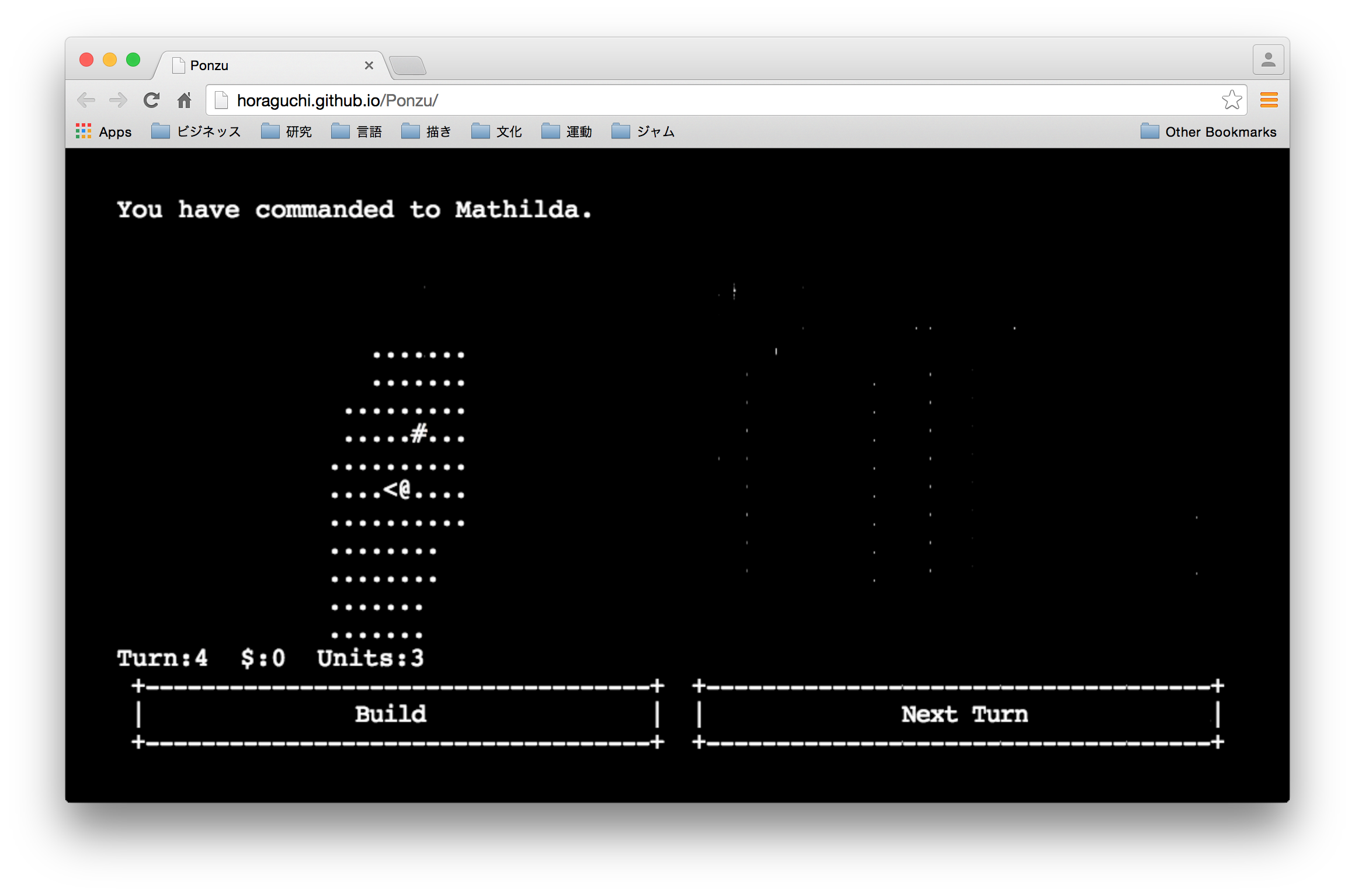 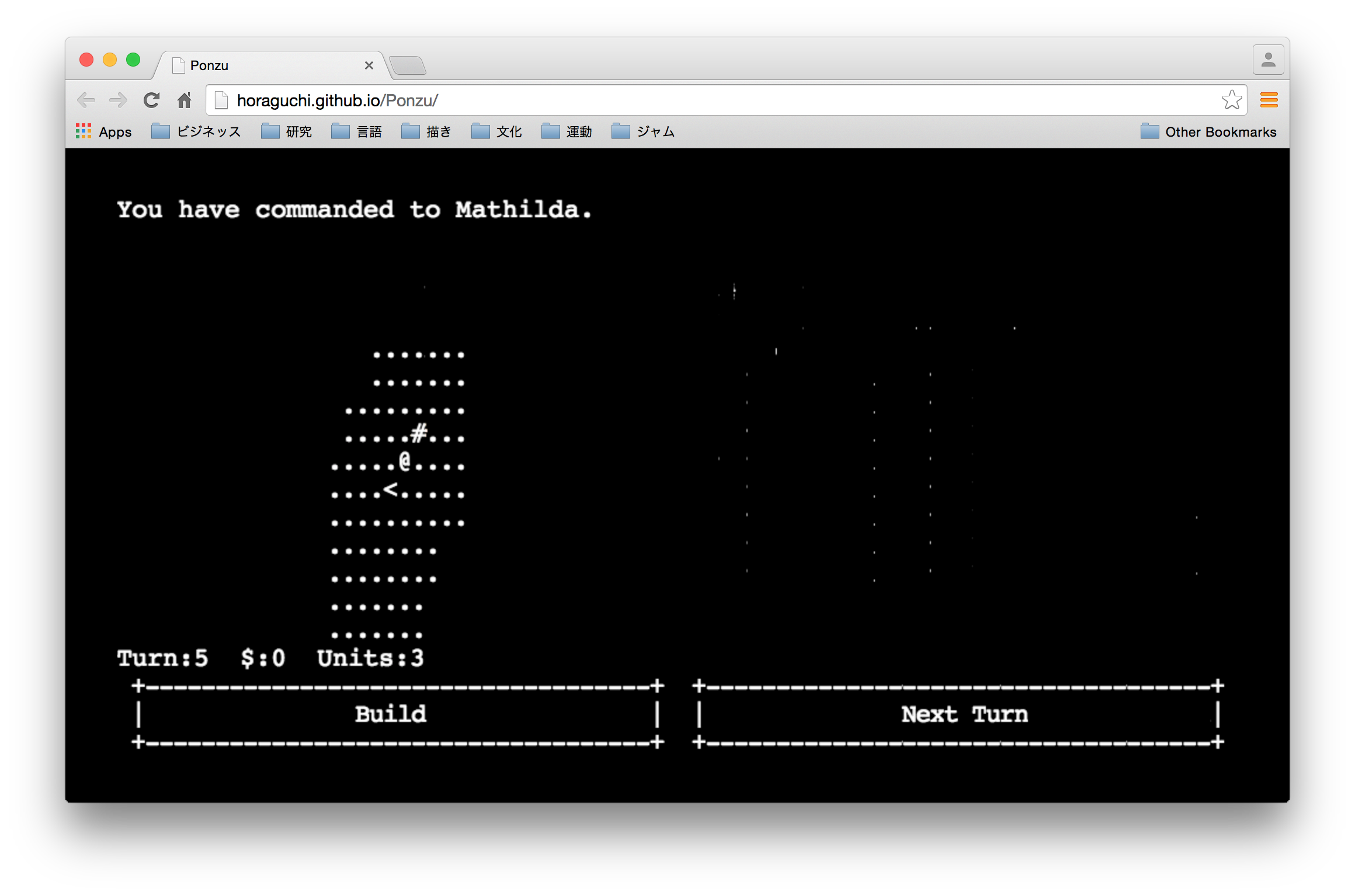 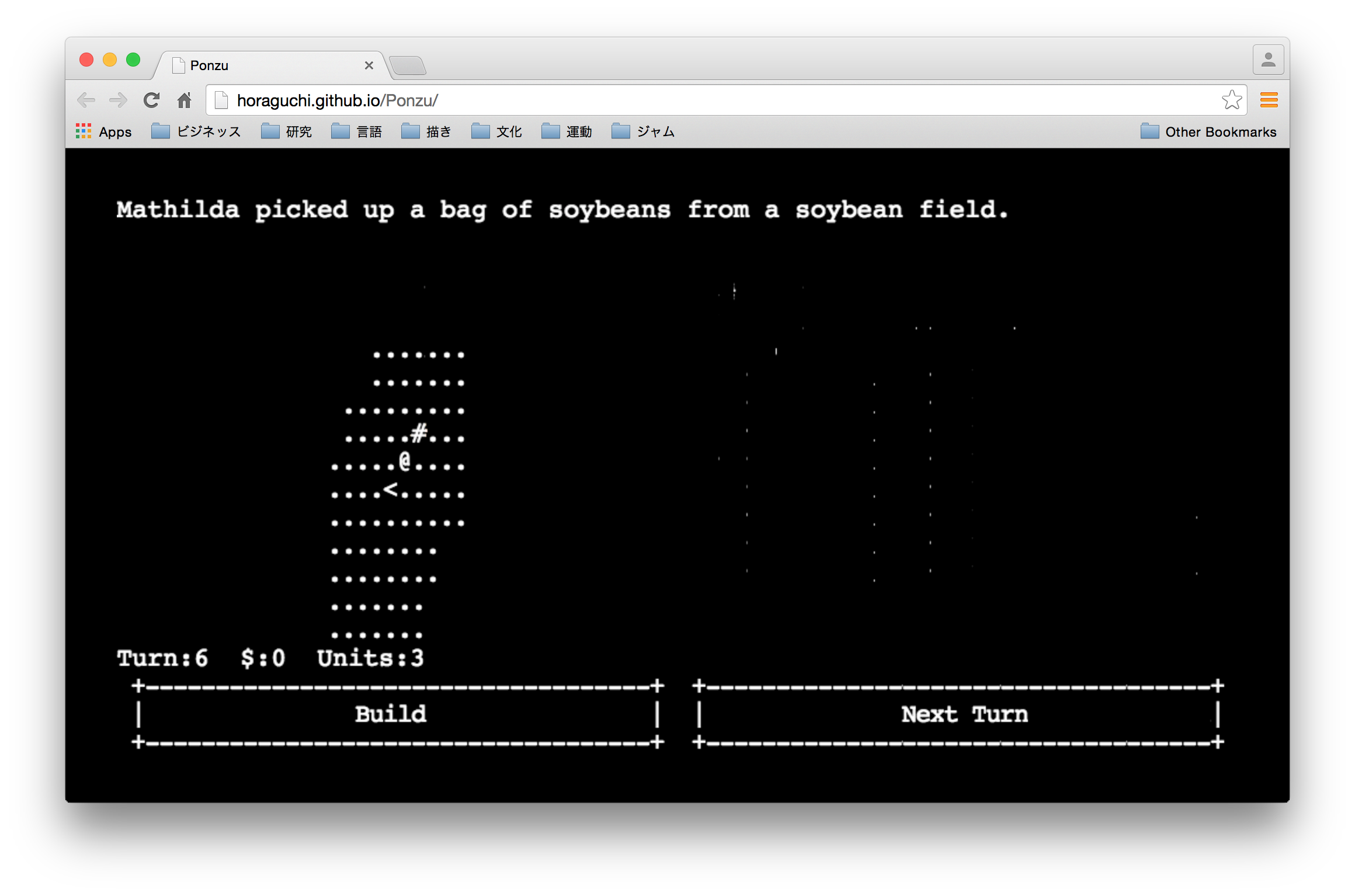 The documentation and video above should be enough to start playing Ponzu. The early levels at least play much more like a puzzle crafting game like SpaceChem than a roguelike; I suspect that later levels will stay the same.

Ponzu (HTML5) was developed by horaguchi.