You awaken in a cave wielding a sword and rifle and decide to descend as far as you can while meting out destruction until your enevitable death in Strive.

Strive's strengths as a hack `n' slash include its interface and small level size. Instructions appear in relevant contexts, such as a reminder that pressing q will throw the currently selected grenade. I thought the modeless method of equipping items worked particularly well: Pressing s will shoot your first ranged weapon, and holding shift and pressing s will pick up a ranged item and equip it in the s-slot. Standardizing this to the grenade selection would make it even easier for new players. 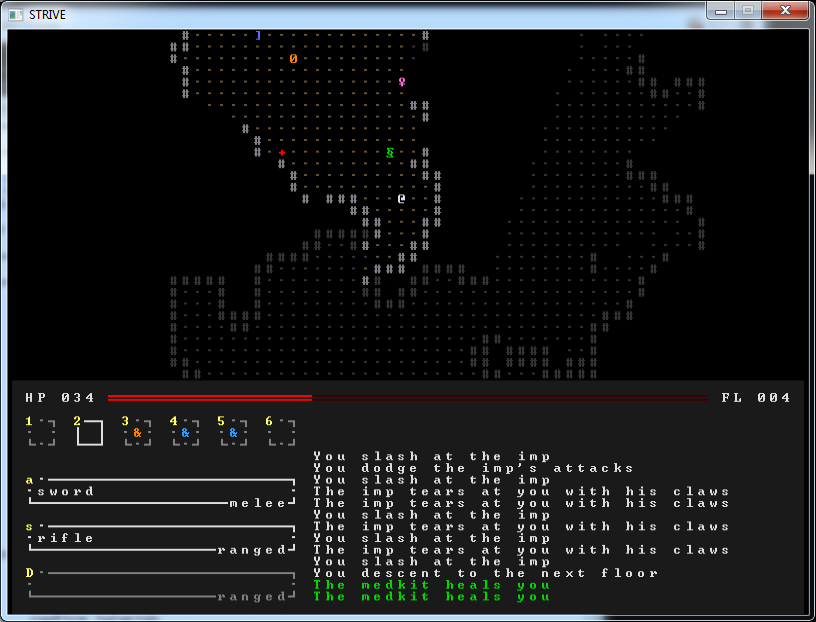 I encountered two color selection issues. I had problems seeing the purple creatures and their attacks, though I'm willing to blame the monitor. The other confusing aspect was the ASCII gore that monsters explode into is a dark red color, and I frequently confused the gore with the brighter red med kits for healing.

Strive is a solid entry and, like Goblin Gold, could serve as a first roguelike or procedural death labyrinth. My particular interest in roguelikes isn't in slaying mobs until dying, but I'd encourage you to try Strive if it's yours.