The opening screen prior to customization.

What makes Seven Day Band different is that it prompts the player to customize the game just-in-time: Encounter a new creature, and it asks for a name. See a few more, and the game prompts for damage information. Later prompts will provide opportunities to customize the creature's damage, AI, and more. 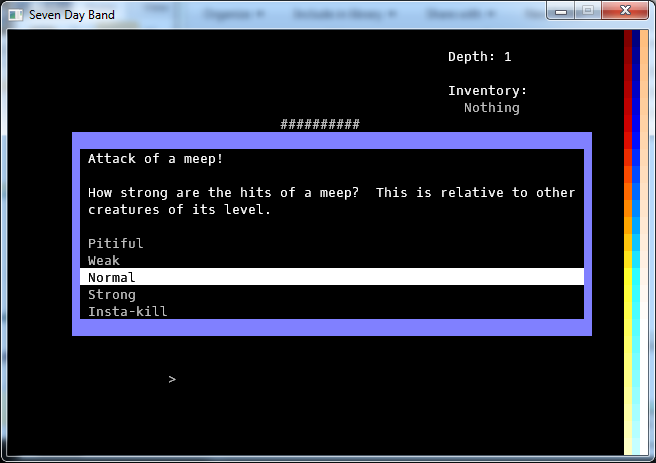 A creature's inital attack prompts the player for how much damage it should do.

The look command is especially powerful as it allows the player to change all of a target's attributes through an easy-to-use menu. It's a great design that lets players tweak in real time without changing to an editor mode or compiling, and the results are immediately apparent. And after all the tweaking is done, the resulting worlds can be shared with others.

I'm not certain if it's possible to tell the game to stop generating new content for customization, but don't let that stop you from trying out Seven Day Band and making your own Angband variant. Making roguelikes has never been as interactive, simple, and fun as this.