I've been thinking about making a card game with a legal theme for a while now, and I finally made a prototype and playtested it with the Eau Claire-area Game Developers. Normally, I do an internal write-up of any games I playtest, but I thought it might be worth posting a version of them here in the future. Going in, I had three questions: 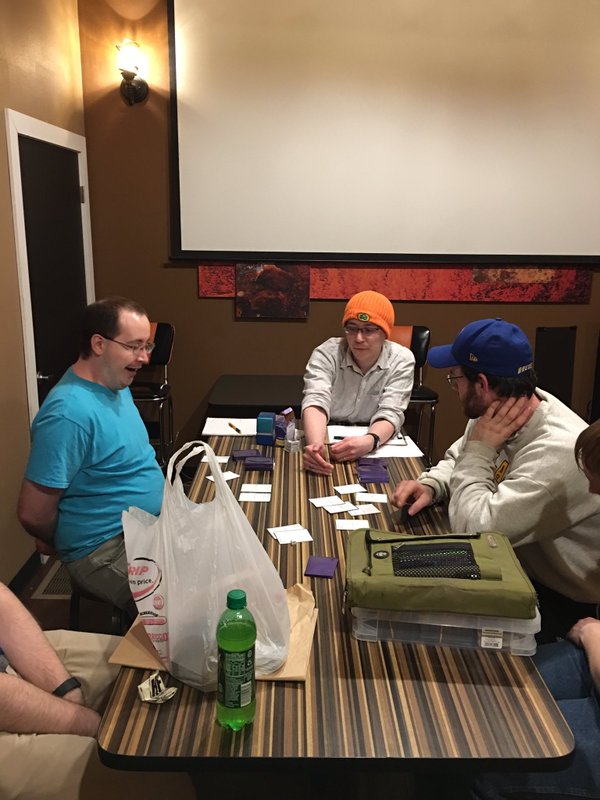 Andy kindly took this photo of the playtest.

First, what's broken? This was the first opportunity to playtest the game with other people, and I just had enough time to make everything playable before our meeting. I had already iterated some of the mechanics multiple times, but I really needed feedback on how closing and court worked.

The short answer is that almost everything was broken. Players weren't sure how to play certain cards, why they would close, how cards functioned, how to solicit clients, how to represent the opposition, etc. The fact that we completed the game at all was a welcome surprise. What did come through, though, was the theme and a rough glimpse of what the game could be.

So second, was closing working at all? Ideally, players would be negotiating across the spectrum of options, both settling and taking cases to court, to best benefit their firm. Maybe even their clients.

Closing completely failed, but this was great to see in practice. They failed in part because I hadn't implemented the incentives for parties to settle, which is fine, but more importantly the rules didn't capture the feeling of negotiating that I want.

And question three, does simultaneous evidence reveal in court feel sufficiently like being in court? Sequential revealing more literally maps onto the trial experience, but simultaneous reveal would let the game progress more quickly.

Simultaneous reveal worked well with the cards I had made, but both methods fell prey to the standard card game problem of needing to know what cards exist to make meaningful decisions. In the sequential reveal, the plaintiff didn't know that a motion could basically win the trial under certain conditions, and so the defense blindsided them to win the game. A dramatic victory, to be sure, but it would have been even better if the plaintiff had known how the card worked and then the defense won.

General player feedback included the systems having a lot going on, ending up with too many potential clients, and the expected general confusion about how to actually do things in the game. Despite it's rough-state, I enjoyed seeing people taking ownership of the theme, saying things like "I'm the firm of X, Y, and Z" and discussing different strategies for victory.

For the next version, I'll be focusing on reducing the number of resources (to wit, using money) and using that to make the next round of closing rules. The court rules also need revision, and I'll take a pass at both how representation works and try an alternative system for presenting evidence.