This was my first visit to a Protospiel as a designer and my second overall. I received some great feedback from Rob at Rattlebox Games and his friend on Draftcard (an older version is available on itch.io). I've been reworking Draftcard to be easier to learn and for both print-and-play and print-on-demand versions. 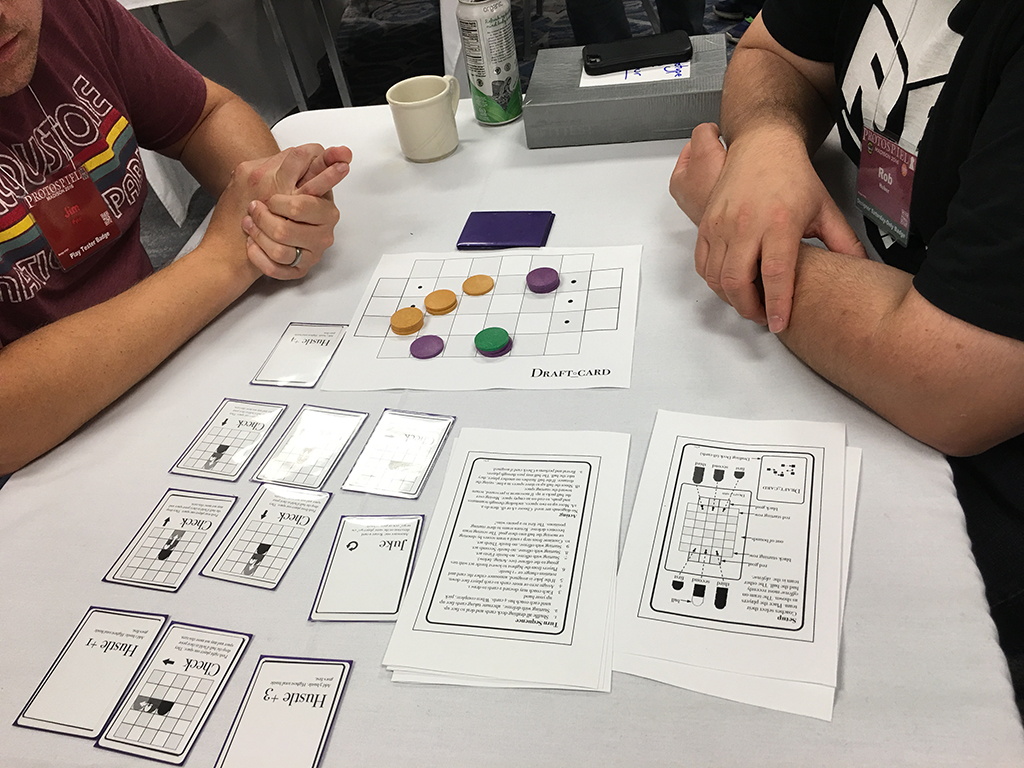 I was hoping to learn whether or not the new rules for Draftcard made it easier to get to the interesting parts of the game. The answer: No, it still has a steep learning curve in part due to not using the pieces that the rules referred to. Another issues was clarity of interactions. I've always preferred to play games with complex interactions such as Magic: the Gathering digitally if they enforce the rules because doing so removes the ambiguity. In analog games, making a resolution to get on with the game feels tentative without exhaustively consulting FAQs and errata, with house rules further complicating matters. I still have work in clarifying Draftcard's interactions, and that's what the next round of iterations will focus on.

The feedback on After the Disaster: Triage was also valuable, this time from Andrew Voigt, Samuel Spaid, and Forever Interactive's Anthony Shine. I printed a copy of the game through The Game Crafter and was generally happy with the result. Having a nicer prototype also made it easier to play and more enjoyable, too. 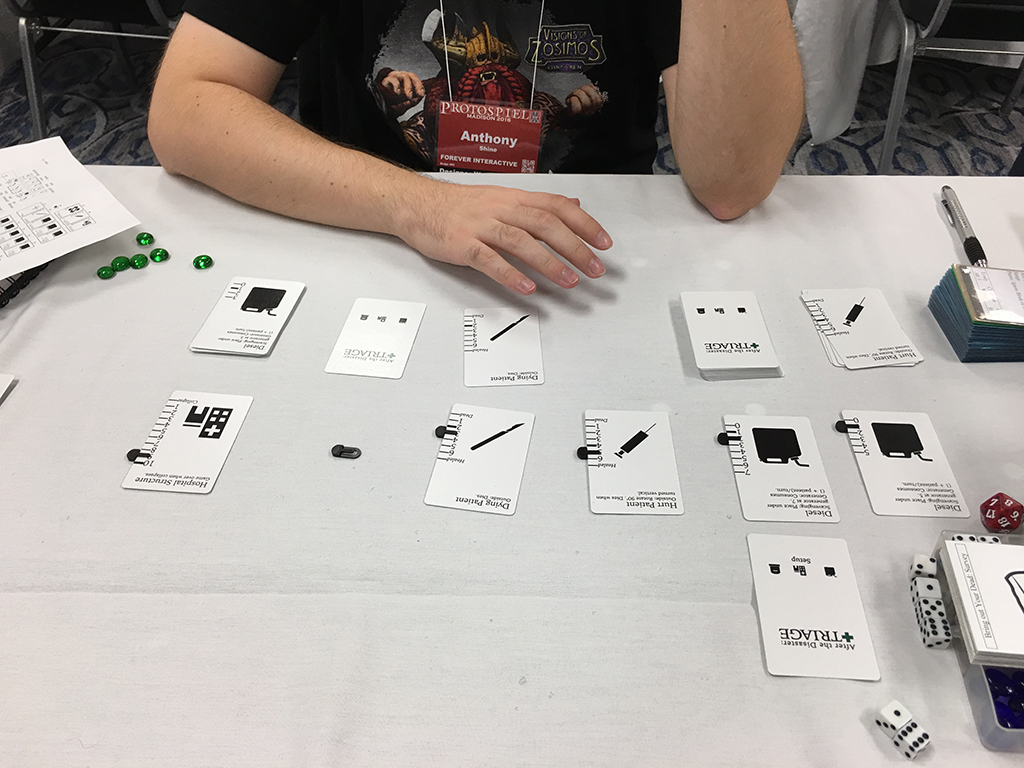 Playing After the Disaster: Triage.

Triage seemed to work well for at least the first game or two, but players wondered if it would hold up well through more plays. Other feedback included a request to differentiate the patients more, to include other types of complications, and to make the game harder. One problem with two of the playtests is that they weren't blind (I explained the rules and helped with card interactions due to time constraints), and so I didn't get as much feedback on the rules as I had hoped. That being said, Triage appears to be in a good place and I'll hopefully only have a few more tweaks before it's ready for release.

I don't have photos of the other game I brought, Grandmother is an Ama, but it'll be available soon as part of Fishing Jam 2 (update: it's available here).

I have some mixed feelings about Protospiel itself, and note that this is only my second time attending. As it's essentially a critique-session for game developers, it's easy to fall into an unproductive mindset both as a developer and as a player. As a developer, I found the blind play tests incredibly valuable as they quickly showed the difference between how I vs. the players thought the game functioned. If people can't play the game I intended by reading the rules, then the rules need more work. Any additional feedback was helpful in pinpointing where the rules weren't clear. The non-blind feedback was also valuable to hear how other designers would approach issues in the game. For both blind- and non-blind feedback, the more experienced developers provided clearer, more specific feedback on their reasons as well—which is harder to obtain outside of an event like Protospiel.

The big caveat is that I've seen many developers continue revising games over and over in an attempt to satisfy their most vocal critics, and Protospiel can exacerbate that tendency with so many different developers and players present. Since the amount of generic feedback (e.g., "Your game is good. Off to the next one!") is lower, attending Protospiel could be challenging without a strong vision for how you want the game to be and play.

Would I go to another Protospiel in the future? I think so, and I suspect that attending for all three days would drastically improve the value. Friday and Sunday are have fewer attendees, which means it's easier to play more of the games and receive feedback on yours, and I've had to prematurely end conversations both times as I only attended on Saturdays. Following the guidelines is also important: Play other games and give good (i.e., as clear and specific as possible) feedback on those games. It's not worth going if you don't want to hear feedback on your game because Protospiel is primarily a big critique session. There's also an unwritten (I think) rule that you shouldn't leave your game at a table if you're going to be gone for a while, say, sampling the local restaurants for lunch. Your game will be removed publicly and, yes, you'll have to find and pick up the pieces when you return.

It's also important to realize that Protospiel is a both a community and marketing event. If you're a more active participant in the community and give good feedback, it'll be easier to get people to play your games and may be easier to play the games you want. It's also easier to get people to play your game if it looks good, has players that are clearly enjoying the experience, and if you appear inviting to players. Conversely, it may not be as valuable if you're not an active participant, have a rough and early prototype, or are unpleasant to players. It's also worth noting that the attendees at both Protospiel events skewed white and male; I don't know if or how the organizers are improving that.